As we open Torah’s second book, we pivot into the bondage and liberation that forged a Jewish people and our ethical covenant. This week’s portion, Shmot (“names”), begins with names of 12 tribes — descended from Jacob’s sons and grandsons — now resident in Egypt where a new Pharaoh arose “who knew not Joseph.” The portion’s most important name, however, is not the new Pharaoh or the Jewish tribes enslaved under the lash, but God’s quizzical new name that Moses receives at the burning bush. The scene is wondrous. An angel comes to Moses in a bush, וְהִנֵּה הַסְּנֶה בֹּעֵר בָּאֵשׁ וְהַסְּנֶה אֵינֶנּוּ אֻכָּל / “Behold, a bush burns with fire, but the bush is not consumed” (Ex. 3:2). Moses turns to the bush, and thus to God. From the bush, Moses hears that the ground beneath him is holy, that God knows the slaves’ cry and sends Moses to free them. Incredulous, Moses quizzes the bush:

Ehyeh Asher Ehyeh?  Why does Moses receive this divine name now, what does it mean, and how should we receive it in our day?

To name is to create and relate. Creation began with God naming night and day. Eden’s first human named the animals, but finding no mate. The first woman we call Eve in English is חָוַה / Chava in Hebrew, named as the source of all human life (chaya). Our ancestors of Genesis named children for their circumstances or character that would forge their relationships. So when God reveals to Moses a new divine name, it was to reveal an aspect of God’s character and invite Moses into a new relationship.

Ehyeh Asher Ehyeh / אֶהְיֶה אֲשֶׁר אֶהְיֶה, however, is no usual name — and not only because it’s a divine name. Its Hebrew means “I will be what I will be,” existence unfolding and potentiality. The first letters of the three words, each an aleph (א), Hebrew’s first letter, connote beginnings. So God’s new name tells Moses that divinity is existence unfolding, limitless power, beginnings and pregnant possibility. These are what send Moses to unshackle the slaves.

Most names also are about limits and distinctions: if I’m David, then I’m not Joshua. Human names distinguish, denote difference and restrict. Not this name for God: “I will be what I will be” says nothing about what will or won’t be. This name implies no limit.

Hence the relationship into which God calls Moses: know divinity as existence unfolding, with limitless potentiality — and profound power can flow. Let Ehyeh Asher Ehyeh into your life, and the captive can go free. Turn toward the possibility of miracles, and a burning bush will not be consumed.

It takes a Moses to relate to God in this way, but not even Moses could see God’s proverbial face and still live a limited human life (Ex. 33:20). Still, the burning bush offers us a glimpse. Tradition teaches that no desert tree is humbler or lowlier than a thorn bush, so God’s choice to call Moses from a thorn bush shows that nowhere and nothing is devoid of divinity (Exodus Rabbah 2:5).

Divinity is existence unfolding in our lives, transcending every name and idea our limited minds can conjure. God calls us into relationship precisely from our humility, to reveal a power able to liberate the cruelest bondage. A fleeting glimpse can make holy the ground under our feet. A moment’s awareness of Ehyeh Asher Ehyeh can transform everything. 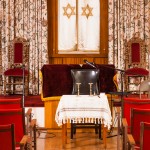